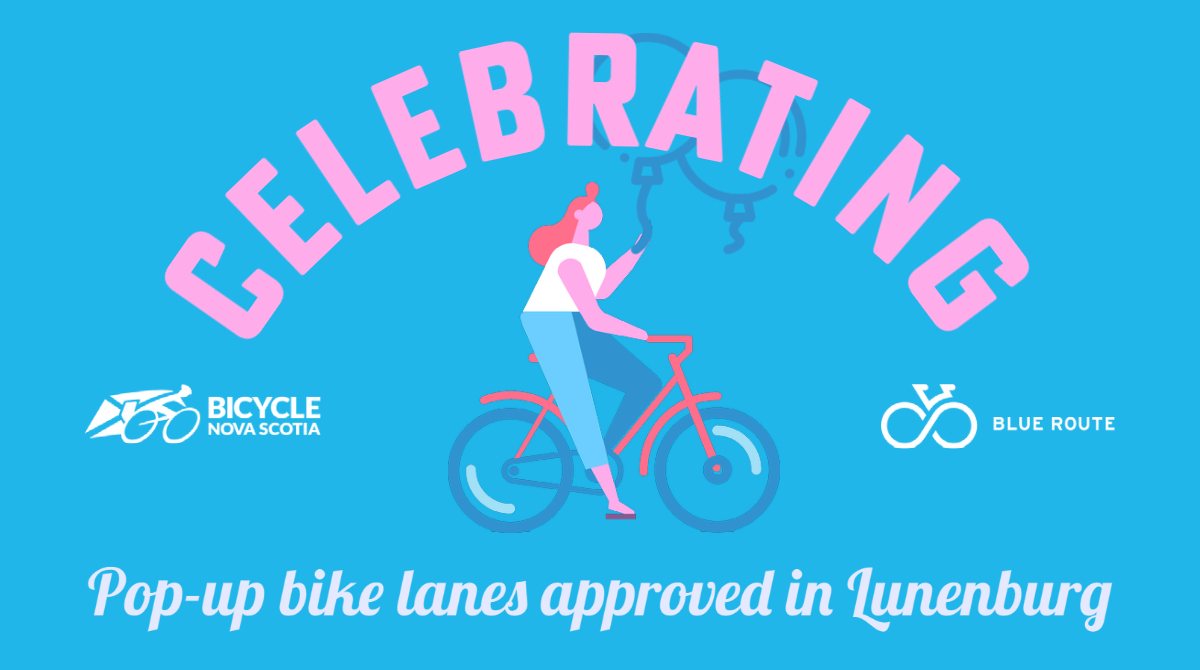 Bicycle Nova Scotia is excited to announce that the Town of Lunenburg will be implementing the province’s first Blue Route Hubs Pop-Up Project in June 2022!

On Tuesday, August 10th, Bicycle Nova Scotia presented a plan to Lunenburg Council for a pop-up bike lane and pedestrian mall on Montague Street in Old Town Lunenburg. The pop-up is based on the Blue Route Hubs Project in Lunenburg,  which was completed in 2019. This summer, Bicycle Nova Scotia met twice with a group of local residents and stakeholders to review the pop-up plans and finalize a design. The project team decided the temporary changes should be implemented for 1 month. This project will give the Town of Lunenburg an opportunity to test out the infrastructure and determine what changes could be made to improve the design, before long term (and more costly) changes are made.

The pop-up will include a bi-directional bike lane and pedestrian mall on Montague Street over three blocks between Bluenose Drive and King Street. 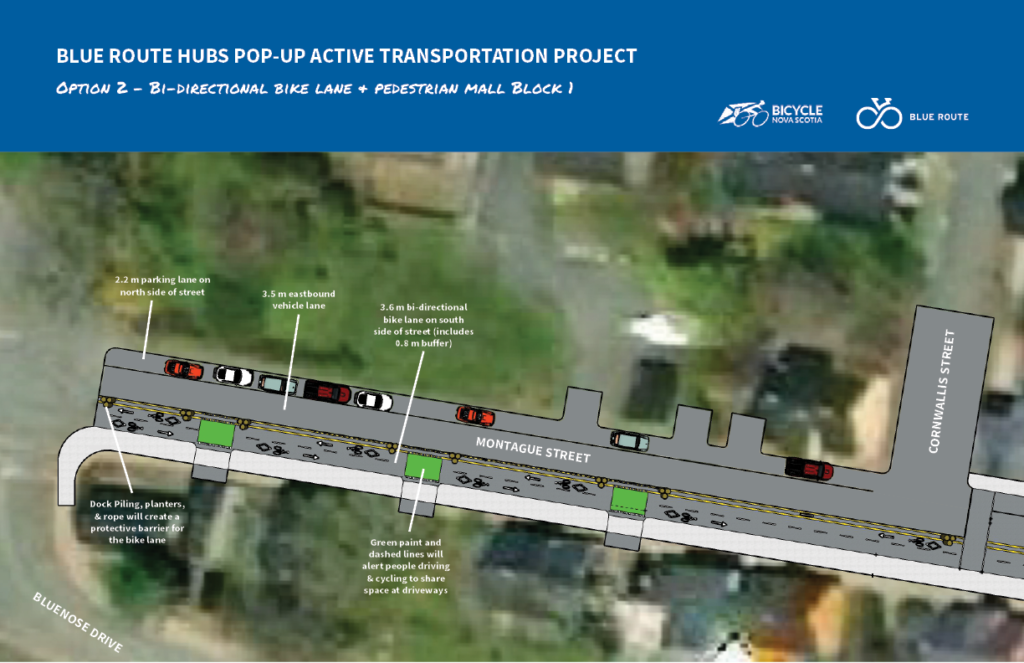 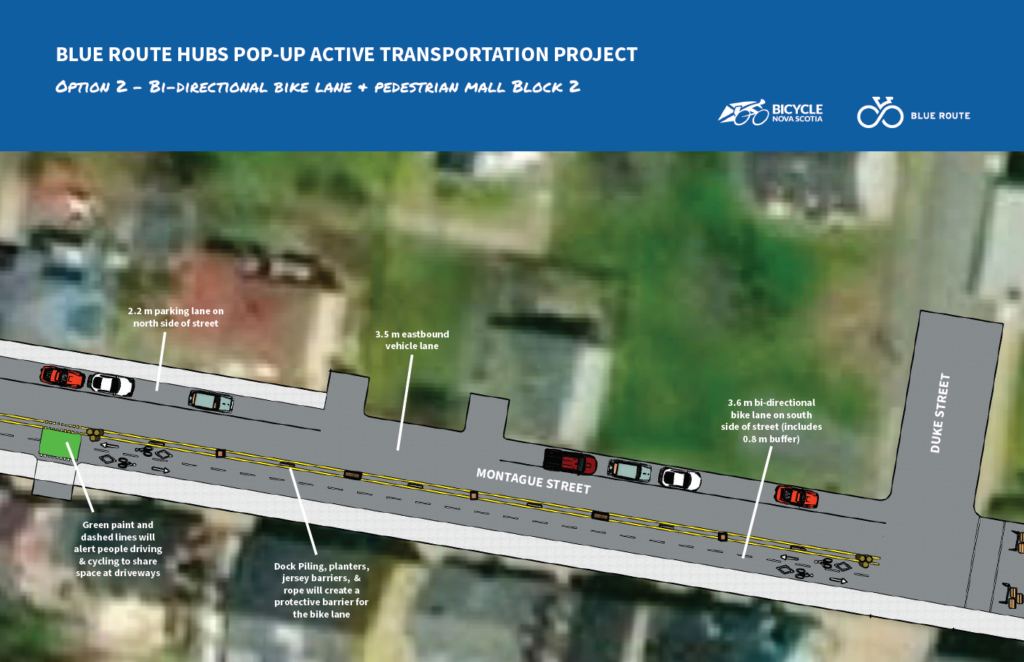 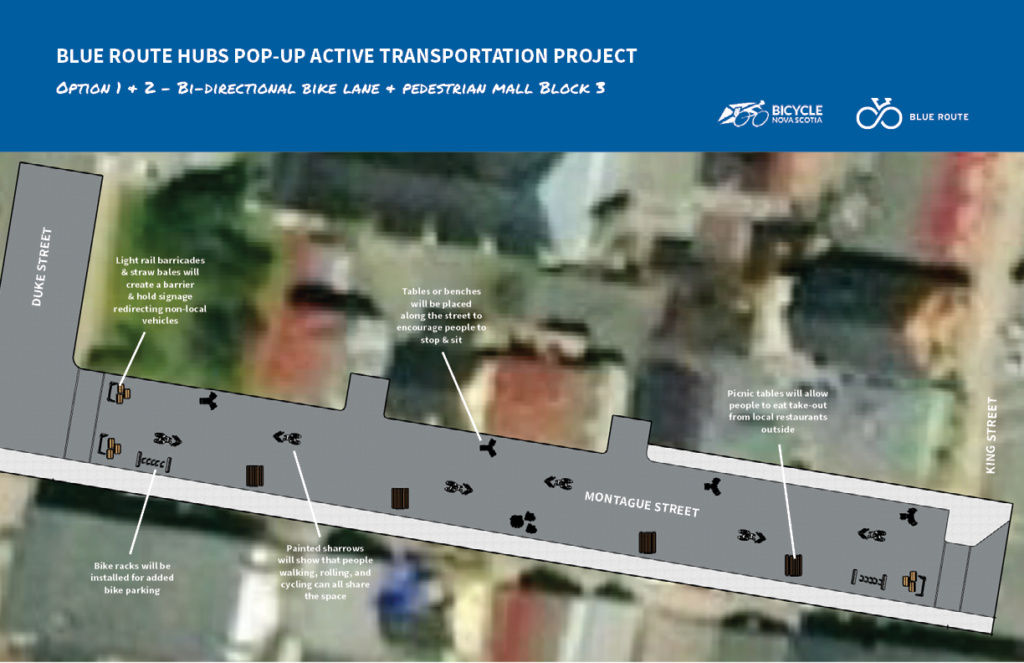 Bicycle Nova Scotia originally proposed this Pop-Up project for September 2021, however, Council felt that the timing was wrong when considering where the province is in regard to the COVID-19 pandemic.

“Considering the tourist season we have already had, businesses are really just recovering. Who’s to say, maybe the bike project would be better, but right now they know what to expect. The known knowns are better for the business community at this point. I hesitate to put any undue stress on a bunch of businesses that are recovering from the pandemic at this moment.”
– Councillor Halverson

At Bicycle Nova Scotia we know that bike lanes have a positive impact on businesses. Studies around the world show that people on bikes spend more per overall than people who arrive in cars in downtown areas, including in the UK, and in the US. Adding bike lanes helps local businesses, NYC saw a 49% increase in retail sales where a bike lane was put in, and in Toronto, people were 48% more likely to report spending $100 or more after a bike lane was installed.

“In almost every single case, there was an increase in business following the installation of the bike lanes”
– Beth Savan, retired senior lecturer in geography from the University of Toronto

Although bike lanes have been proven to support local business, this project was designed within the context of the COVID-19 pandemic. While the threat of a fourth wave is looming, and this project could give Lunenburg some resilience during further shutdowns, we understand the aversion to change in uncertain times. Bicycle Nova Scotia wants the same outcome as local businesses, to improve access, and we look forward to working with local businesses to ensure that we have a strong plan that will achieve that goal.

With the additional time, we are looking to deliver something truly inspiring! We will take over the fall and winter to engage with businesses in Lunenburg, particularly those located on Montague Street. We will also connect with organizations and individuals in Lunenburg that are passionate about the community and interested in making this project a success. If you have ideas, or want to learn more you can send an email to Alison Carlyle [email protected]