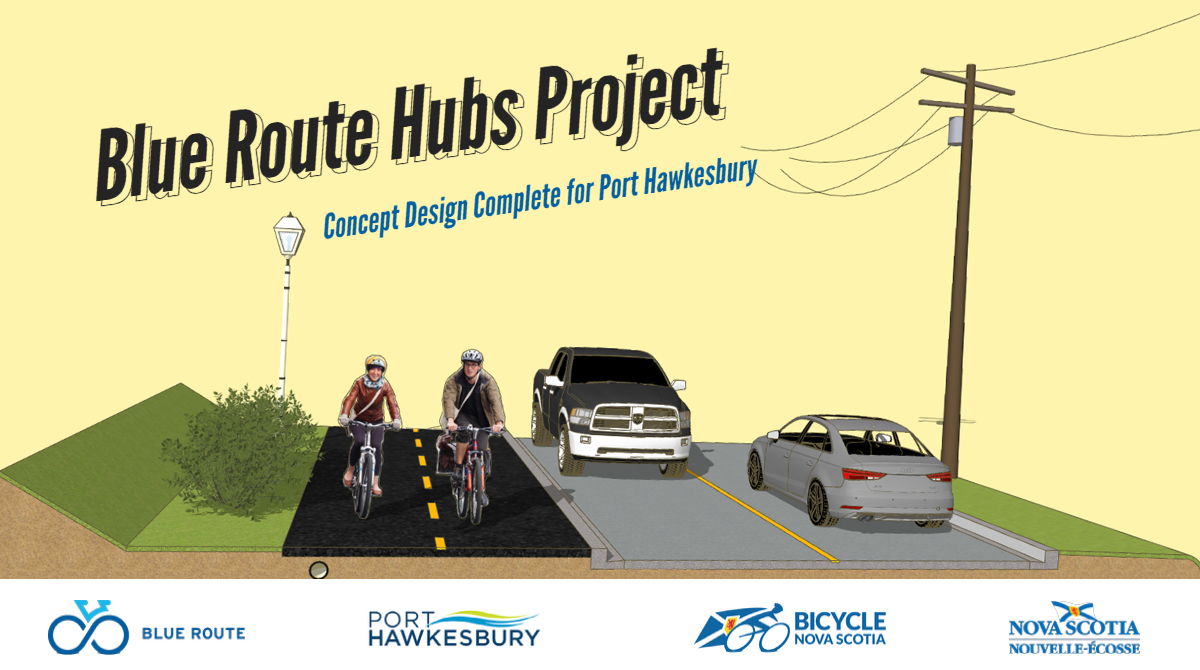 Port Hawkesbury, NS (March 1, 2022) – Over the past two years Bicycle Nova Scotia has been working closely with the Town of Port Hawkesbury to develop a plan for increasing active transportation infrastructure in the town. The partnership developed through the Blue Route Hubs Project, a Bicycle Nova Scotia initiative to support towns along the provincial Blue Route cycling network to design and implement safe “all ages and abilities” infrastructure for walking, rolling, and cycling.

All ages and abilities, or AAA, is a way that planners, engineers, and active transportation advocates describe sidewalks, bike lanes, multi-use pathways, or intersections that will be safe and comfortable for disabled people and people of all ages; from 8 years old to 80 years old, and beyond. AAA is a way of designing streets to prioritize safety and comfort for those who are most vulnerable, which includes anyone travelling on the street who is not inside a motor vehicle. Bicycle Nova Scotia has used the AAA philosophy to design new walking, rolling, and cycling infrastructure for Port Hawkesbury.

The primary route that has been designed connects right through the middle of the town, on Granville Street, Sydney Road, (Old) Sydney Road, and Pinecrest Drive. Residents and visitors of the Town of Port Hawkesbury will be able to walk, roll, or cycle safely along these streets in the coming years as the concept designs are refined through a detailed design process and then constructed.

“The Town of Port Hawkesbury is very pleased to partner with Bicycle Nova Scotia over the past number of years. Their expertise, planning, and community consultation skills have been invaluable to our Town.  The focus provided to create healthy and sustainable travel options for people of all ages and abilities will benefit the Town of Port Hawkesbury, surrounding communities, and visitors for many years.”